According to an important Bitcoin technical indicator, the peak of this rally is likely soon to come. Cole Garner, a crypto-asset analyst, shared the chart below, which shows Bitcoin’s price action over the past three years along with a custom indicator.

Prior to multiple medium-term highs during 2019’s rally and the 2017 exponential surge, this indicator flashed a warning. That same warning is starting to flash now. The indicator suggests that Bitcoin may soon reach a medium-term/local peak, at which point a pullback or period of consolidation will take place.

Of note, the final local top signal has yet to be spotted. But considering historical precedent, it may appear in the coming weeks or even days. 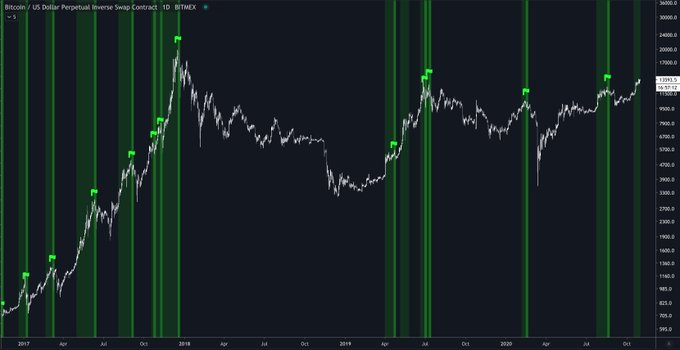 JP Morgan analysts also think that Bitcoin is near a peak on a short-term basis.

The bank’s analysts released a report on cryptocurrencies the week before last. The report indicated that per the CME futures market, Bitcoin may be overextended to the upside in the near term.

JP Morgan cited a positioning index/indicator, which suggested that certain investors are the most bullish they have been this year. The index reached highs above those seen during the summer, namely those seen right before the 25% decline at the end of August and start of September.

While Bitcoin may face a short-term drawdown or consolidation, analysts are confident that a new all-time high is imminent. Tyler Winklevoss recently stated:

“I do think we will see an all-time-high price for #Bitcoin before 2020 is over. Even though the price has climbed from 10k to almost 14k in less than a month, it hasn’t really gone on a breakout run yet. When we start to see 3-5k surges then the bulls will be on the run.”

Fundamental trends seem to indicate that the cryptocurrency is poised to move higher in the weeks ahead.

The Bitcoin network has seen its first stale block event since October 2019 resulting in a $3 double spend. With mining difficulty at an all-time high (ATH) and hash rate distributed among major players, Bitcoin […]

Despite Hive Blockchain Technologies Ltd. requesting a cease and desist order to stop using its name, Binance has gone ahead and completed the distribution of ‘HIVE’ crypto tokens anyway. Binance Carries on Regardless with ‘HIVE’ […]