The surge of interest in China woke up the entire cryptocurrency market and boosted Bitcoin’s trading volume. Yet, Bitcoin maintains relative stability, and the market is waiting to see the direction in which it will take off towards the end of the year.

The altcoin market also felt the surge, and it seems that a lot of them are strengthening their communities and surviving the harsh crypto winter. Moreover, we continue to see a lot of additional fundraising and, perhaps, the relatively small fine that EOS paid won’t scare off entrepreneurs to seek funding, and we could see another wave like the one back in 2017. However, many investors have learned from their mistakes and are no longer in a hurry to throw their money at baseless promises.

When it comes to Bitcoin, the week was fairly eventful. We saw a flash crash on the Deribit cryptocurrency exchange that caused its price to pull back to $7,700 in seconds only to recover moments later. This shows that the market is still rather small and that liquidity is an issue in specific domains. It will be interesting to see if the upward trend continues or if we will see a correction at the end of the year, especially with the volatile November ahead. It’s essential to set clear goals and make sure that risk is managed in a controlled manner. It’s also appropriate to take a look at the Dollar Cost Average (DCA) investment strategy if you haven’t already. 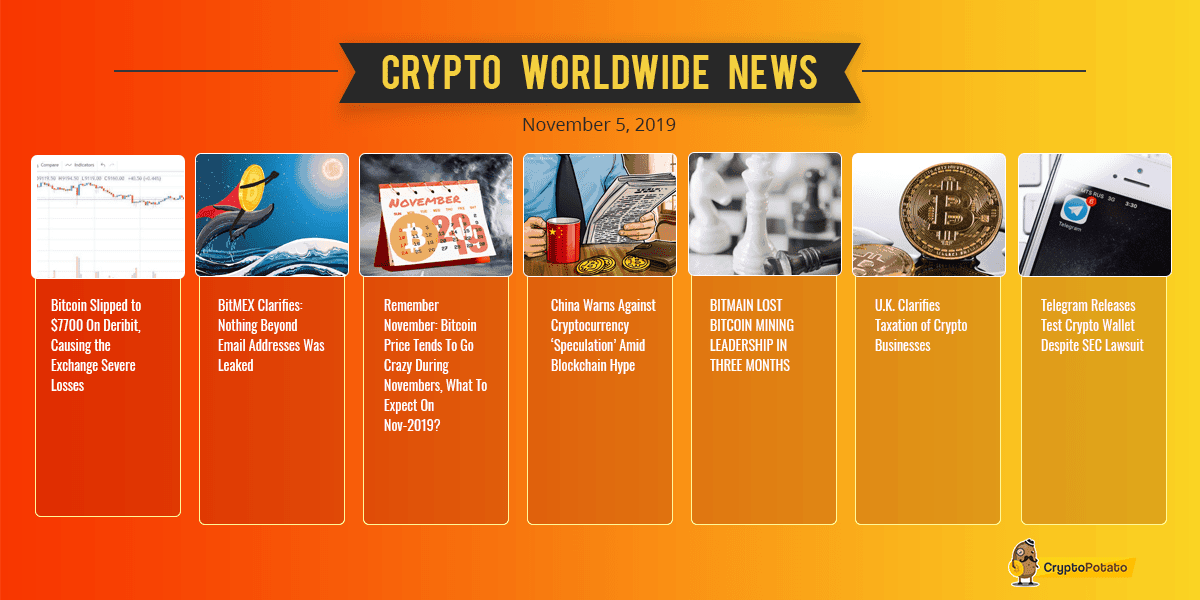 Bitcoin Slipped to $7700 On Deribit, Causing the Exchange Severe Losses. Despite trading in a tight range at the beginning of the month, Bitcoin’s price went through a violent red candle on cryptocurrency exchange Deribit. In just a few minutes, the price dropped to $7,700, causing a lot of losses. The company has stated that it would reimburse all of the affected users.

BitMEX Clarifies: Nothing Beyond Email Addresses Was Leaked. Just a few days ago, BitMEX made a mistake which ended up leaking the email addresses of a lot of its users. However, ever since, the company has stated that it’s doing everything it can to remedy the situation and that no other personal information besides the email addresses has been leaked.

Remember November: Bitcoin Price Tends To Go Crazy During Novembers, What To Expect On Nov-2019? November has historically been a volatile month for Bitcoin’s price. As we’ve just entered the month, it’s interesting to see how the price performed over the years. At the same time, some of the most popular cryptocurrency analysts have weighed in on the matter, sharing their stance on what’s to come during this November.

China Warns Against Cryptocurrency ‘Speculation’ Amid Blockchain Hype. Following the speech of China’s president on blockchain and how the country should work to adopt the technology, there has been quite a lot of hype in the field. However, the country has also warned that it shouldn’t speculate about cryptocurrencies such as Bitcoin. They’ve also stated that even though blockchain’s future is here, they should remain rational.

Bitmain Lost Bitcoin Mining Leadership In Three Months. The two Bitmain-operated mining pools, Antpool and BTC.com, have lost a lot of their old positions. This has shrunk the share of Bitcoin block rewards. Despite this, both pools remain some of the top miners, but the leaders are now Poolin and F2Pool.

U.K. Clarifies Taxation of Crypto Businesses. The United Kingdom has issued guidance which clarifies the tax treatment of cryptocurrency businesses. It states how they will be subjected to income tax, corporate tax, capital gain tax, national insurance contributions, value-added tax (VAT), as well as stamp taxes.

Telegram Releases Test Crypto Wallet Despite SEC Lawsuit. Despite the recent SEC lawsuit that the company is involved in, Telegram, the messaging app, has released an early desktop wallet for its GRAM tokens. Users are now able to download and test it on Linux, Windows, and macOS, and it’s available on the official website of the company.

Click here to start trading on BitMEX exchange and receive 10% discount on fees for 6 months.

Altcoins Continue Their Bleed To Death

[ad_1] It’s official. The altcoin season is over. Bitcoin has returned to the driving seat reaching dominance levels last seen during the bull run in late 2017. Data from Coinmarketcap at press time showed that Bitcoin’s […]

[ad_1] Bitcoin is starting to correct from its rampant rise above $28K this week, with the current price down $1,900 from its recent peak of $28,420. With the Bitcoin market capital currently above $520 billion […]

Bitcoin Price Might Drop to $6,000, But There’s Good News

[ad_1] The last few days have been rather dramatic for the cryptocurrency markets, as most coins have marked double-digits losses. Bitcoin’s price shed $1,500 in one hour, which alarmed the community. However, the bigger picture […]