This week was easily one of the most eventful ones in the cryptocurrency field in terms of overall developments, especially in the DeFi sector.

Starting with Bitcoin, however, not much changed since last week. BTC price started trading at around $11,800 seven days ago, and it’s currently at roughly the same level. However, this doesn’t mean that there was no volatility.

On Monday, BTC briefly broke for the second time above $12,100, causing serious enthusiasm in the community. Over the next few days, however, the cryptocurrency reversed and dropped to as low as $11,100, only to rebound and reach its current trading point.

What happened in the DeFi space, however, is nothing short of amazing. On August 12th, a group of developers launched an experimental protocol called YAM that combines the inherent qualities of both YFI and Ampleforth (AMPL). In less than 24 hours, people locked about $600 million in the protocol, elevating the yield farming craze to a whole new level.

The hype was shortlived, though, as soon after that, the developers revealed they’d found a bug in the rebasing mechanism, which wasn’t audited.

They prompted YAM holders to delegate their tokens in an attempt to push a proposal that would fix the problem, and the community came through, surpassing the necessary quorum. Unfortunately, at the last moment, the developers identified another mistake, which prevented them from pushing through with the fix, causing hyperinflation in the reserve protocol and devaluing all the YAM that was farmed.

The momentum in the DeFi space is also causing serious shifts in Ethereum’s network, the fees of which have skyrocketed to a new all-time high surpassing the $400 mark, making it a lot less profitable for small players to take advantage of liquidity pooling.

Elsewhere, just yesterday, the Winklevoss brothers had a meeting with the poster-child of legacy market day trading, Dave Portnoy, explaining the merits of Bitcoin. Portnoy supposedly bought some BTC, as well as LINK, and is contemplating his own coin. Whether or not this will come to fruition, though, only time will tell. 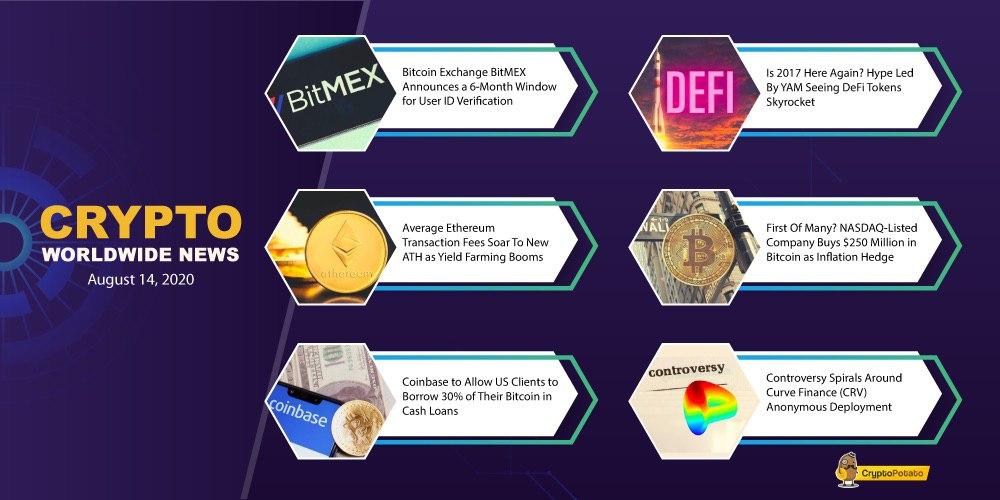 Bitcoin Exchange BitMEX Announces a 6-Month Window for User ID Verification. BitMEX, one of the most popular Bitcoin margin trading exchanges, has announced a 6-month window for users to complete a mandatory ID verification. The move is aimed at meeting global regulatory standards.

Average Ethereum Transaction Fees Soar To New ATH as Yield Farming Booms. Following the recent developments in the DeFi space, the average transaction fees on Ethereum’s network skyrocketed to a new all-time high. The latest information indicates an average of about 0.02 ETH per transaction.

Coinbase to Allow US Clients to Borrow 30% of Their Bitcoin in Cash Loans. The leading US-based cryptocurrency exchange, Coinbase, has announced that it will allow its US clients to borrow up to 30% of their Bitcoin in cash loans. There’s a special waiting list available for people who want to take advantage of the offer.

Is 2017 Here Again? Hype Led By YAM Seeing DeFi Tokens Skyrocket. The DeFi space is all the rage for the past couple of months now. One platform, however, got all the attention in the past few days. YAM Finance saw almost $600 million locked in its protocol in less than 24 hours only to crash shortly after as a code error made the entire network ungovernable.

First Of Many? NASDAQ-Listed Company Buys $250 Million in Bitcoin as Inflation Hedge. MicroStrategy has become the first NASDAQ-listed company to include Bitcoin as part of its asset allocation strategy. It supposedly invested $250 million in the cryptocurrency as a hedge against inflation.

Controversy Spirals Around Curve Finance (CRV) Anonymous Deployment. Curve Finance, one of the eagerly-awaited protocols in the DeFi space, saw its governance token CRV deployed by an anonymous developer. Industry experts have already voiced their concerns regarding the legitimacy of what happened.

This week we have a chart analysis of Bitcoin, Ethereum, Ripple, Chainlink, and WAVES – click here for the full price analysis.

In what seems to be a case of black hat hackers masquerading as the internet’s self-professed Robin Hoods, two charitable organizations have received mysterious bitcoin donations from a cybercriminal group. The generous gesture is worth […]

To say that a lot has happened over the past seven days would be an understatement. Starting off with Bitcoin’s price, it’s currently trading at around $10,500, down $150 over the week. Everything was going […]