It appears that China is waking up to blockchain, and this did to the market what Bakkt’s futures failed to. President Xi Jinping urged further adoption of blockchain-based technology, and his statement might have been one of the reasons for Bitcoin’s 40% surge over the past few days.

Indeed, Bitcoin had its best week since May. It’s not the first time that statements from China have rocked the markets, although this move left most technical analysts surprised. It also saw a lot of short positions liquidated, especially for those traders who were counting on a correction to $6,000. Now the market is pulling back, and investors are trying to figure out whether the trend is strong enough to sustain itself or if it’s just a bull trap.

The timing of the news from China came as the market entered fairly bearish conditions after the price broke beneath support around $8,000. However, we pointed out last week that market sentiment usually changes in an instant. Indeed, just before the end of the year, the Bitcoin market has re-calibrated and marked a successful 2019. However, Bitcoin’s regulatory framework is still not good enough, as the existing infrastructure fails to enable Bitcoin’s integration into the traditional economy.

The war between Bitcoin and banks is just beginning, and it will definitely take some time to see sufficient liquidity. Banks are still having difficulties, and regulators don’t allow new companies to operate in the field due to a lack of clarity regarding the rules. Despite previous predictions that 2019 would be the year of regulation, it seems to have been just the opening shot in terms of financial regulation of cryptocurrencies.

Altcoins are also rising up and have maintained their value with respect to Bitcoin. Some of them have had very impressive performances. Chinese altcoins such as NEO and TRX were especially prominent over the past few days. Despite this, Bitcoin’s dominance rate wasn’t affected, and it even increased after the sharp price increase.

In conclusion, as we approach the middle of the last quarter of 2019, Bitcoin is as volatile and unexpected as always. We may certainly see another leap and an attempt to break existing records, or the price could plummet within days. This is definitive proof that there’s never a boring day in the cryptocurrency markets. 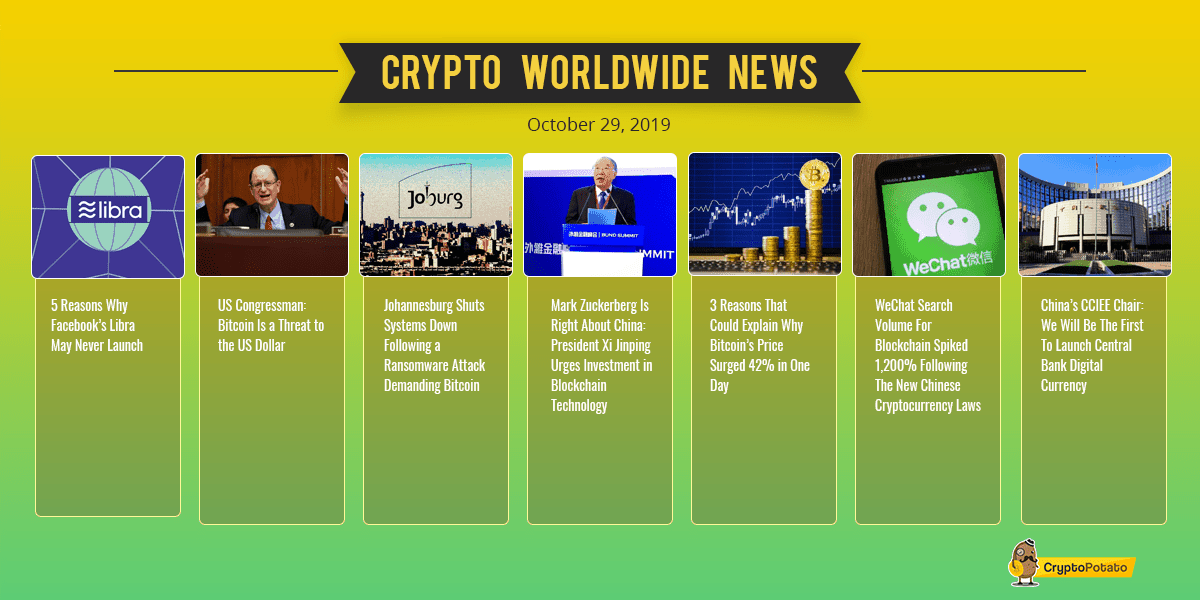 5 Reasons Why Facebook’s Libra May Never Launch. Facebook’s Libra was announced earlier this summer. Ever since, the company has seen a backlash of negative attention as regulators and media have grilled the project for a range of reasons. Here are a few of them that should be taken into account.

Johannesburg Shuts Systems Down Following a Ransomware Attack Demanding Bitcoin. Subjected to a ransomware attack, the South African city of Johannesburg shut down all of its systems for a relatively brief period of time. Interestingly enough, the ransom which was demanded took the form of bitcoins. The attackers wanted 4 BTC in order to remove their harmful software.

Mark Zuckerberg Is Right About China: President Xi Jinping Urges Investment in Blockchain Technology. A day after the CEO of Facebook, Mark Zuckerberg, warned that other countries might get ahead of the US in terms of blockchain development, the president of China praised the technology and urged its further adoption. This may have sparked the recent rally in the cryptocurrency markets.

3 Reasons That Could Explain Why Bitcoin’s Price Surged 42% in One Day. Bitcoin experienced one of its most notable price increases since 2011. In just a couple of days, the cryptocurrency’s price rose by more than $3,000 before pulling back slightly. It was a fairly eventful week in terms of news; here are a few potential reasons which could explain the rally.

China’s CCIEE Chair: We Will Be The First To Launch Central Bank Digital Currency. The vice-chairman of China’s Center for International Economic Exchanges (CCIEE) said that the country is getting closer to launching the first-ever central bank digital currency. He also stated that he doesn’t believe in Facebook’s Libra, but that innovation is needed because current payment methods are outdated.

[ad_1] The Nigeria Securities and Exchange Commission (SEC) has released a proposed cryptocurrency regulation guideline while classifying crypto assets as securities. Crypto Regulations Underway According to an official release on Monday (September 14, 2020), the […]

[ad_1] The head of a $230 billion Singaporean investment fund is the latest high-profile public figure to have their likeness used to promote Bitcoin Pro – an investment scam making the rounds on Facebook. Ho […]

[ad_1] Back in 2018, Craig Wright, Bitcoin’s SV powerful proponent, was sued by the estate of Dave Kleiman. He used to be Wright’s former business partner back in the early days of Bitcoin. The case […]